What could I do for your business?

Idea-based illustration for advertising, web, print, publishing and new media. Over 30 years’ experience working as an Art Director, illustrator and animator on leading brands. I have worked in major advertising agencies in London and Scotland, and am now based in Cumbria.

The Tennents Special “Blues Brother's “campaign was originated with Peter Mill in Scotland.
The advertising campaign lasted for 9 years  The original film won a clio  which we collected from New York,after flying over by Concorde kindly paid for by Tennents .

Baxters "Family of fine foods campaign" moved Baxters up above Campbells in the soup charts.The films were co worked with Ruth Shabi and directed by Nick lewin.

The Leith agency in Scotland used my work ‘The Askit Man’ for an iconic advertising campaign. It won a DADA, and was featured in the book ‘Made in Scotland’ by Carole Foreman (www.birlinn.co.uk)
Household names that began in Scotland

Together with fellow creative Gareth Howells, I designed a zero-cost animation to help fund the building of a new high school in Portobello, Edinburgh. The animation went viral, helping raise £42.5 million for the project, and £11 million for a new school building on Portobello High’s old site.Saint Johns.

A similar viral film was made to raise funds for an outdoor community pool in Tynemouth which has helped raise over £250,000.00.

"The breathing animation has been a huge success for the charity. As you can see here; https://www.youtube.com/watch?v=Ov3NsKKCmnk it has had nearly 10 000 views on YouTube, so thank you again, for not only helping us, but helping thousands of other people out there."
NO PANIC.ORG.UK

I have been awarded “Illustration & Animation Studio in Northwest, 2018” by SME News

I have been awarded “Best cartoon animator 2019” by SME News

Clients I have worked for include: 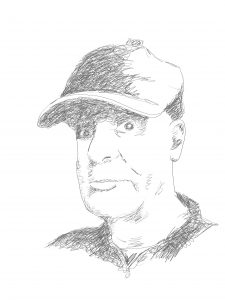